The search was on for a “pattern maker”. Someone to create a pattern and a sample according to my raincoat sketch. On a recommendation from a local clothing manufacturer, I called a woman in Fall River known for such projects. Holy Moly. Fifteen seconds on the phone and I knew she was not someone I wanted to work with. Very rough around the edges. Back to the internet, searching for “pattern maker Boston”, where I found an article in the Boston Globe about this fellow in the South End who has a business, ‘Hinds, Lines and Designs’.  I give him a call.  Sounded nice enough, soft spoken, seemed competent. Arranged a Saturday to meet.

The day arrives. Daughter Hayley (my newly appointed Director of Marketing), husband Peter (Chief Operating Officer of course!) and I trek in together to a warehouse near SOWA in the South End…we introduce ourselves to Roger and I share my vision of the coat…He immediately picks up a pile of shiny bubblegum pink fabric – “You see this sheet?”  (translated that is ‘shit’ with his Caribbean accent) “Some other woman wanted to make a raincoat, this is crap!” …..Uh, is this guy nuts?  Isn’t he going to ask me questions? Aren’t we going to have a formal discussion of what’s involved, his fees, etc?    Ultimately we did, but not until we heard many stories of the various characters that walk through his door.  Stories of bridesmaid after bridesmaid who ordered her dress several sizes too small…stories of  bridesmaids who wait until the week of the wedding to bring in their dress…stories of crappy work done by others brought to him to repair.

Roger is an artist. He is a delightfully honest, smart, funny person who loves to talk.  At first I was  skeptical, but after weekly visits since June I am beyond thrilled with his work and actually look forward to his hilarious tales.  He guided me to resources for fabric and told me not to waste my time at certain places in NYC.  He has advised me of lining options, of test-wearing the coat, of next steps for production resources. All this while working on a number of other projects and assisting others that walk through his door. 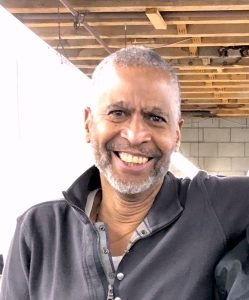 Roger works long hours and takes great pride in his work.  He exudes a passion for life and himself that is contagious, summed up in his words, “I love me bad!”    Now it seems he has a passion for my raincoat – when I arrived recently for a fitting his face lit up as he shared stories of women that had been in his shop, saw the coat and and admired the design – “These are women in the fashion industry!”, he tells me.  WOOHOO!  Very exciting!