You apply cologne or perfume before leaving the house, then generally don’t give it a second thought…unless you are in a shop, or at a social event, and you hear, “Someone smells so good!”

“That’s me!” Ginger would say. “It’s Dolce Gabbana. People always comment on it!”  Yes, it is a delicious scent, the original that she wore, but I never wore it because I didn’t want to smell the same as my mother.  Right? You get that!   Instead I would explore my own scents, and in my younger days it was Obsession by Calvin Klein and Oscar De La Renta.   Fast forward to the present, I like wearing less commonly known fragrances and also like having variety – different scents to match my mood or outfit choice.

One thing I have learned is never to but a fragrance without trying it first, because that’s the only way to know how it will react with your body chemistry, and if you really like it.  The representatives in a department store are happy to give you samples (in little glass vials), which I find also come in handy for business travel – much lighter than packing your full bottle of cologne…

While away on business each week I use one of my cologne samples each morning. Many will go in the trash after one use, some are worth trying a second time, then recently I discovered one that I loved.  Mmmmm, smells so good… every time I wore it. The brand name was on the little glass vial which soon became an empty little glass vial.  Must save it and buy this fragrance!

A few weeks ago when shopping in Bloomingdales in Chestnut Hill, I was passing by the fragrance department and slowed down as I tried to remember the name of the cologne (of course I left the vial at home)…”Can I help you?” a saleswoman asked.  “I am trying to remember the name of a fragrance.”  And the guessing game began…”No…no….not that….no….no…I better just wait until I retrieve the vial..”  Then my brain starting throwing words at me…something Italian…aqua?…..agua???….The saleswoman asked, “Acqua Di Palma?” and with an arm raised high in the air I shouted “YES!!!!” as if I had just won the final round of a game show. 🙂   Now as you might imagine, this line features more than one scent, but as soon as I took a whiff of the original, I recognized it right away. Mmmmmm, smells so good…. 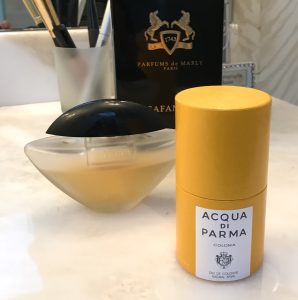 Supposedly this is a unisex fragrance, known to be worn by celebs of both sexes.  While I am no pro at describing scents, this is one I will wear for a strong, no nonsense mood – an everyday scent.  For a soft/feminine scent I wear La Perla (yes, the underwear brand), and for intense/sexy it is Safanad from the Parfums de Marly collection (found it at a pharmacy in Greenwich, CT)…Carol Daly was the lady that helped me in Bloomingdales, and Regina who works there for Creed (a distinctive English line) supplied me with more interesting samples to try.  Fyi, Blue Mercury also carries a full line of Acqua Di Palma.

How long has it been since you tried a new fragrance?