Sometime back in late August my niece Dana (the cutie in hot pink) discovered through social media that Family Feud would be holding auditions in Boston. “We should go!”, she said, “We love Family Feud, it would be a fun experience even if we don’t make it”…didn’t take much to convince me or my daughter, or my sister Shelley who is a big Family Feud fan…the first real decision: who will be #5 on our team? After taking into account who was interested/available and who would be ‘good’ at it, Dana’s twin brother Michael (behind me in pic) was chosen.

PRE-AUDITION PREPARATION: The first step was to send in an application for an audition, which they recommended include photos and/or a video. Jeez! Who has time for this??? Sure, we are all super busy, but this is so up our alley, we made the time. On October 3rd after a long day at work, after dinner was cleaned up, after little ones were put to bed, we gathered together at my sister’s home and spontaneously taped a video – Peter recorded us on his cell phone.  There were a few ‘outtakes’ as we messed up or couldn’t stop laughing, but it went well remarkably well.  We even made up a little Family Feud song to the tune of ‘Cheap Thrills’!


Dana sent off the application the next morning and we were soon scheduled to audition at 11am on October 15th. You know what’s coming next…another big decision…WHAT DO WE WEAR???  Audition guidelines instructed all to dress business casual, no casual gear – “Remember, this is an interview”,instructions said….we also wanted to look ‘ready for fun’ and coordinated as a team. Believe it or not, I did not ‘style’ the family…because my daughter Hayley just had a baby in August she was most limited in wardrobe, therefore took the lead.  Her hot pink blazer was the start of our pink/black/white theme… 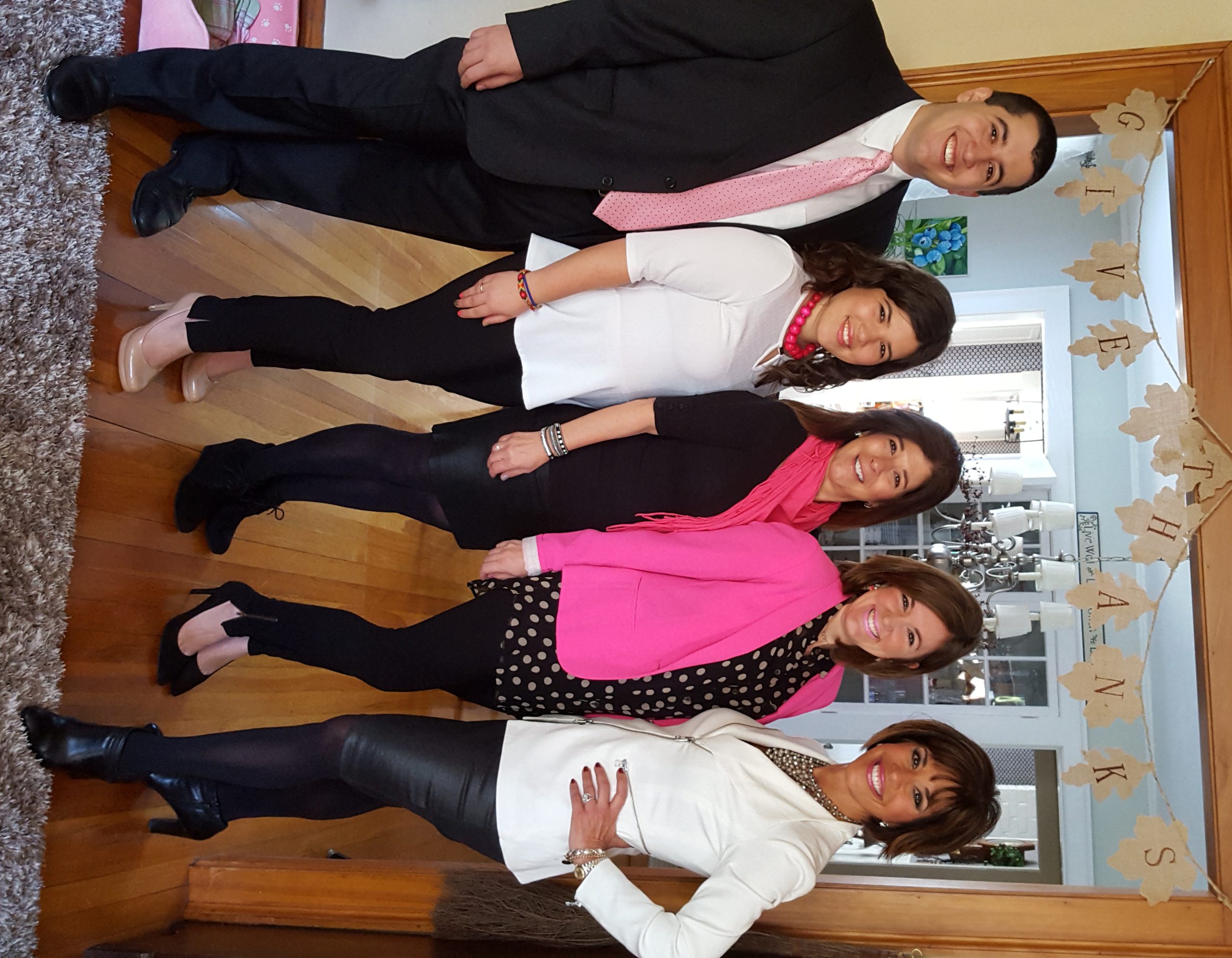 It was a beautiful fall day as we headed into Boston… 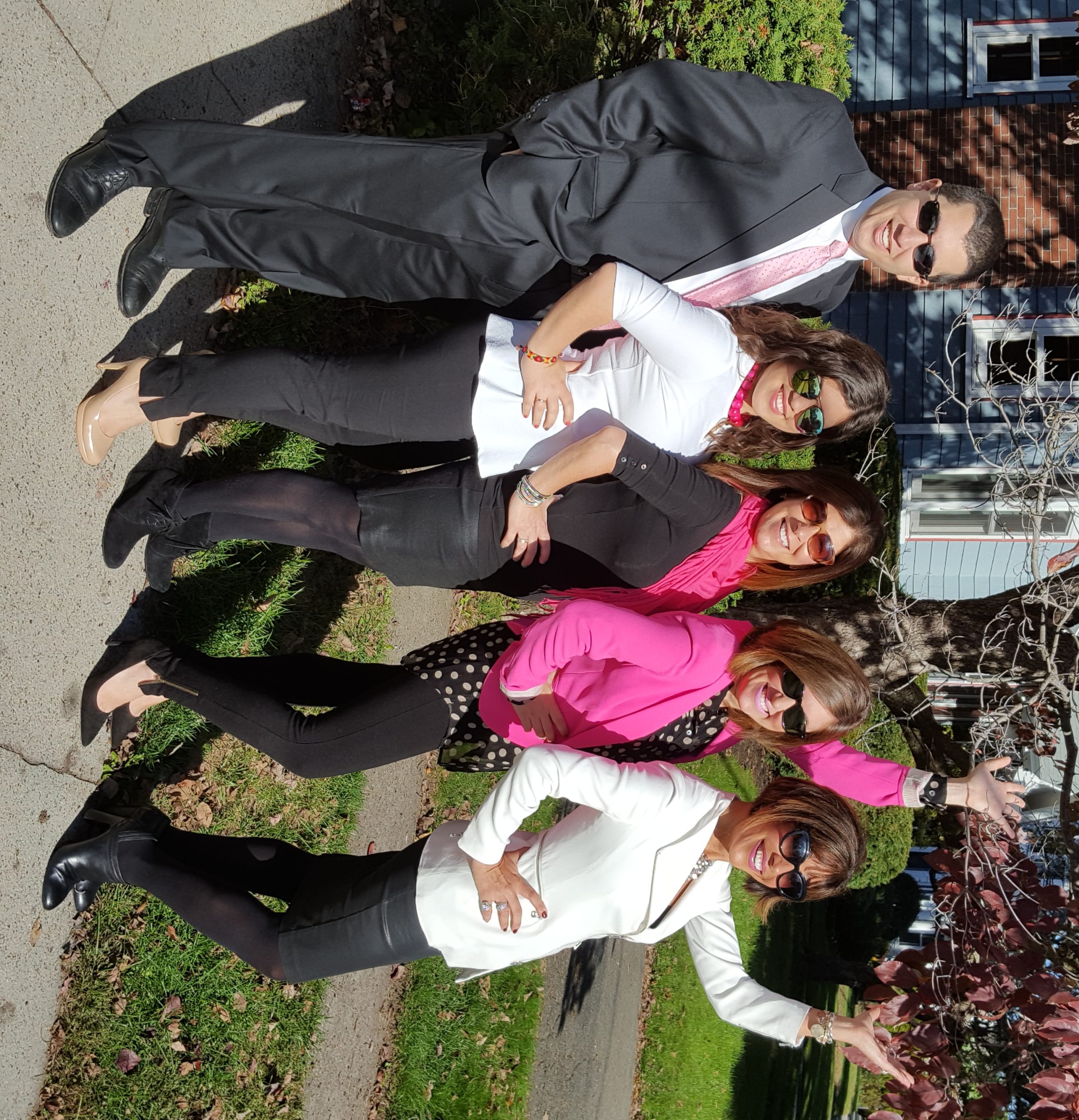 THE AUDITION:
Along with HUNDREDS of other families, we were directed to an auditorium where we sat waiting for our turn to play a ‘mock’ game with another family…we were told that they were looking for  energy, excitement, and no bouts of silence which is a killer on TV.  We felt confident and were already excited as we sat in our seats waiting for our turn…I introduced myself to a jovial family from Dorchester sitting next to us and said hello to a Greek family sitting behind us…finally we were called!!!! “THATS’S US!, LETS GO!”, said Hayley….We stood in a row, me first as the captain of the team.  After introducing myself and my family, it was time to play…(this is all being filmed).  Our first question:  Name a food that you can eat even if you have no teeth….I whacked the buzzer and went first with my answer: “MASHED POTATOES!!!!” This answer allowed us to play the round which we did with great enthusiasm – “Good answer!!! Go Shelley!! C’mon Hayley!”  Then we had to do a round where the other team played while we huddled and tried to steal the game.  That question: Name something you have more of as you get older. After much excited interaction about possible answers, my answer was “WRINKLES!” which won us the game as we jumped with excitement and high fived each other.

Evidently we did well enough to continue on to the second part of the audition. Now we were even more excited, as we waited in the hallway with others for our turn. When we were called, we were sent to a room where it was only our family, someone filming us, someone giving us direction.  We were instructed to stand in a row, then one by one tell a little bit about ourselves. They were very clear that they were less interested in the content, much more interested in the energy, personality,  enthusiasm, and being loud.  (Ha! We’re Armenian!) We also had decided in advance that we would look for any opportunity to do our song, the one we prepared for the video…so as Michael finished, we began to clap our hands and started singing! We did the whole song, and definitely surprised the filming fellow!

That was it.  They said if we got chosen Dana (the applicant) would receive a postcard in the mail within 3-4 weeks. (If we made it, filming would be in Atlanta in 2017).  So with a good deal of confidence we waited…and waited…two weeks pass…three weeks pass…more than three weeks and we decide that for whatever reason we did not make it.  (All of us disappointed, but it was still a fun experience)…I blame my sister (she had laryngitis that day), my sister blames me (too theatrical)…Oh well, still glad we went.

On November 18th, I am getting my hair colored at Robert’s Salon in Belmont Center.  In the mirror I see Shelley, Dana,  Hayley and my grandson Henry walking in – nothing unusual, they just came to say hello, have done this in the past…as Robert is foiling my hair, with two other ladies sitting to either side of me, Dana slowly holds up the FAMILY FEUD postcard.  A second of a pause, then I literally SCREAM at the top of my lungs and jump out of the chair!!!  “WE MADE IT!!! WE AUDITIONED FOR FAMILY FEUD AND WE MADE IT!!!”   OMG.  All of us were so shocked. We are now all so excited!!!!!  Sometime next year we will hear when the taping is and the outfit planning will begin again! STAY TUNED! 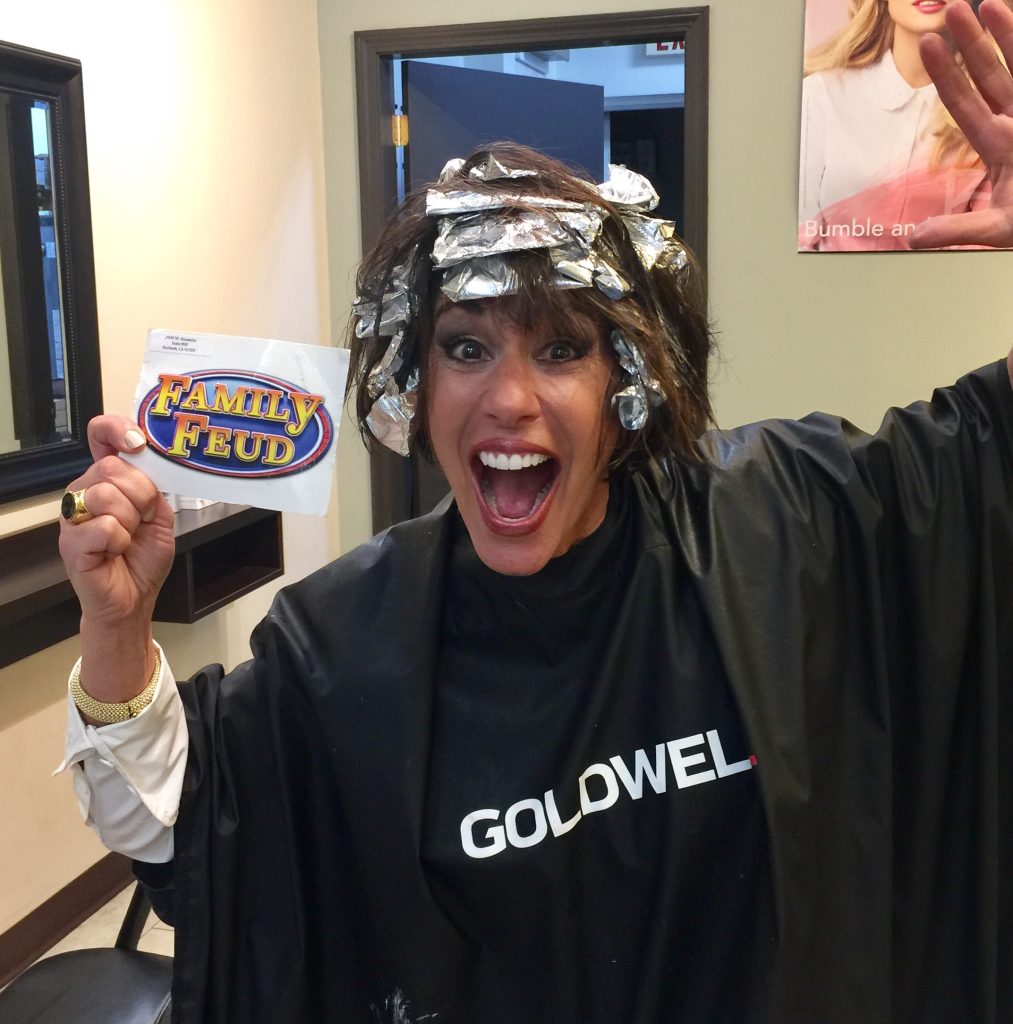